← more from
Tambourhinoceros
Get fresh music recommendations delivered to your inbox every Friday.
We've updated our Terms of Use. You can review the changes here. 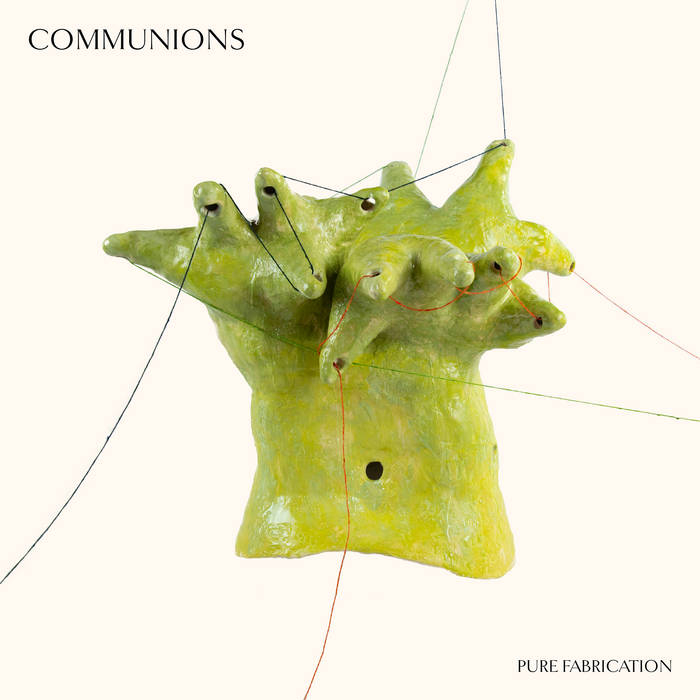 In their sophomore album of Odyssian size and scope, Communions weave an intricate tapestry from “cultural debris”. While Pure Fabrication follows the arc of a reverse coming of age story, Communions’ Rehof brothers have arrived at a point of bold artistic maturity.

“While the blueprint of the coming of age story traditionally involves a protagonist who enters the world seeking answers and emerges renewed, with newfound maturity, Pure Fabrication reveals that growth is tricky and may come at a price. The journey into the ‘real’ world only complicates and fractures any vague sense of clarity that one might have had to begin with.” - Martin Rehof

Coming of Age
Communions’ Rehof brothers have reached a new level of artistic maturity with their sophomore album Pure Fabrication. Communions effortlessly straddle the cerebral and the visceral; abrasive punk sensibilities from the artistic underground of Copenhagen’s Mayhem scene are married with anthemic indie- and pop-rock. Looking back on their previous releases (the first of which, Cobblestones, “was recorded into a cheap USB microphone”), Communions’ lead singer, songwriter and guitarist Martin Rehof reflects:

“We began Communions in the midst of the Mayhem heyday, where noise, punk, and hardcore were the standard ingredients. Within this context, we started making melodic songs based on fundamental pop-structures. When making Blue, we wanted to push this to the extreme, and made a record shaved down to the absolute essentials: simple melodies and driving rhythms. It was almost an exercise in banality. At the time, we thought that this was the most revolutionary thing we could do since everyone around us was making noise, power-electronic, and harsh forms of punk-rock. Strangely enough, this was our attempt at rebellion.

“I think Pure Fabrication is a more realized work. It’s a more mature realization of all of the experiments we have made, an album that, in my view, incorporates all of our best sides from each previous release. But we weren’t approaching this record with any intention of making a radical aesthetic statement, to stand apart from the rest of our peers, or to prove anything to ourselves. I think that Pure Fabrication might be the most genuine thing we have made.”

Reverse Coming of Age
Following the journey of a fictional protagonist, Pure Fabrication opens on the themes of liberation, independence, freedom, transformation—the ingredients of a coming of age story—and the character’s pursuit of them. Yet, “as the album progresses, strong ironic overtones in whatever praise of freedom was besung are slowly unveiled. While the opening songs represent a character with an—perhaps naive—assertiveness and unwillingness to be restrained or suppressed by the ways of the world, by the end of the record, the protagonist questions the entire notion of desire and freedom.

“Question marks punctuate the second half of the record. ‘Is This How Love Should Feel?’ asks whether giving one’s life over to passion is really worth the struggle, while ‘Celebration’ critiques of the modern world’s celebration of personal autonomy. Freedom here is portrayed as a myth, artificially constructed, and as a modern sickness of the soul.

“‘Signs of Life’ continues this theme and asks how much our behavior is governed by other people. The story is told from the perspective of an A.I. gaining consciousness of the fact that it has been programmed, ultimately asking: “Is there something real underneath all that’s been told to me of me?”, a pressing question within the modern world where we’ve all become “Grand tourists on an infinite scroll”.

“The album’s closer, ‘The Gift of Music’, acts as a scene of recognition: it’s recognized by the narrator that you can never create yourself completely freely. What’s more, the idea of freedom is exposed as a construct, and more significantly, an inherited one. Can one be forced to be free? The protagonist's wish to liberate himself from worldly obligation is described as a wound.”

Mythology
Pure Fabrication draws upon the Rehof brothers’ personal experience as much as it does from a collage of myths. The Danish brothers spent over a decade of their childhood and early teens in Seattle, only to move back to Copenhagen in the midst of their formative years. While Pure Fabrication is partly a bid at finding their place and self-understanding through the lens of stories and myths—a keen listener can spot traces of Goethe’s Faust, Shakespear’s Lear, Homer’s Sirens, and the Norse fate-holding Norns—at its core, it is something more: a meta-narrative on the human condition.

“Pure Fabrication can be understood positively, hinting at the fact that our lives are fabrications that we weave on the basis of desire and freedom. Or, more negatively, it can be taken to mean that the stories we fabricate around ourselves and use to understand our lives are in themselves only mere fabrications—myths or worn out templates that we constantly reproduce, and which perhaps ultimately conceal the powers of whatever is actually pulling the strings, whether that be other people, an underlying culture, or some metaphysical goddess in the sky. The lyrics function as kaleidoscopic mixes of different myths woven together. In this sense, Pure Fabrication can also be understood as a meta-reference to the use of mythic material itself; to all of the ‘cultural debris’, if you will, that gets processed over and over again in new and different ways, as it does here.”

Recording
The 15 track, hour-long album embraces creative production techniques, all without venturing too far towards the infamous harshness of their Mayhem milieu. On some songs “the guitar was recorded through a vocoder. When recording, we were open to the gifts of chance that occurred in the moment. For instance, when recording ‘Here And Now’, our producer’s son was in the studio and randomly started counting to 10 in the microphone. We ended up keeping it on the record, because incorporating a child's voice fit nicely with the theme of childhood.”
In addition, Communions have also broadened their instrumentation and creative approach from their strictly four-piece, stripped performance on Blue. “We experimented a lot with different drum sounds/ aesthetics. I think we used different snare drums on every song. On ‘Learn To Pray’ Frederik was using broomsticks, but he hit quite hard with them, playing like he usually would, which gave a really unique sound, like if a rock band were asked to play jazz without really knowing how.”

Fate, freedom, culture, love and identity are on trial in Pure Fabrication, as Communions question themselves and their world on this masterful sophomore album.

Communions' indie rock is marked by sharp cultural criticism, self reflection, and artistic commentary of a grand scale. The Danish band's new music takes the signature indie rock from the dark clubs of their youth in Copenhagen and merges it with full-fledged cerebral critique and symbolism. ... more

Bandcamp Daily  your guide to the world of Bandcamp